“The probe report will be submitted to the ministry next week,” says the probe committee convener 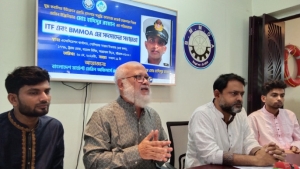 Merchant Marine officers have demanded the release of the probe report on the missile attack on Bangladeshi vessel “Bangla Samriddhi”, floating abandoned near Olvia port in Ukraine.

The Bangladesh Merchant Marine Officers Association (BMMOA) put forward the demand at a press conference at their office in Chattogram’s Agrabad area on Friday.

The ship of Bangladesh Shipping Corporation has been floating abandoned at the Dnieper-Bug estuary of Olivia Port in Ukraine since 23 February, following Russia’s invasion of its eastern European neighbour. The ship has since then been declared abandoned.

Hadisur, third engineer of the ship, was killed in a missile attack on the vessel on 3 March. The 28 surviving crew members of Banglar Samriddhi arrived in Dhaka on 9 March.

In a written statement, BMMOA General Secretary Md Shakhawat Hossain said, “On 20 March, the shipping ministry formed a seven-member committee to investigate the accident. The ministry did not include any representative of BMMOA in the committee, despite our demand.”

“However, the committee was asked to submit its report within 30 working days, but they failed to do so. We demand the complete probe report be submitted to the people concerned and then released to the country’s media soon,” the BMMOA statement reads.

Asked, convener of the probe body, Joint Secretary Tofail Islam of the shipping ministry, told The Business Standard (TBS), “We have almost completed the report and it will be submitted to the ministry next week. However, the ministry and the shipping corporation will decide whether the report will be released or not.”

At the press conference, BMMOA and the International Transport Workers Federation handed over Tk10.27 lakh to Hadisur’s family as assistance.